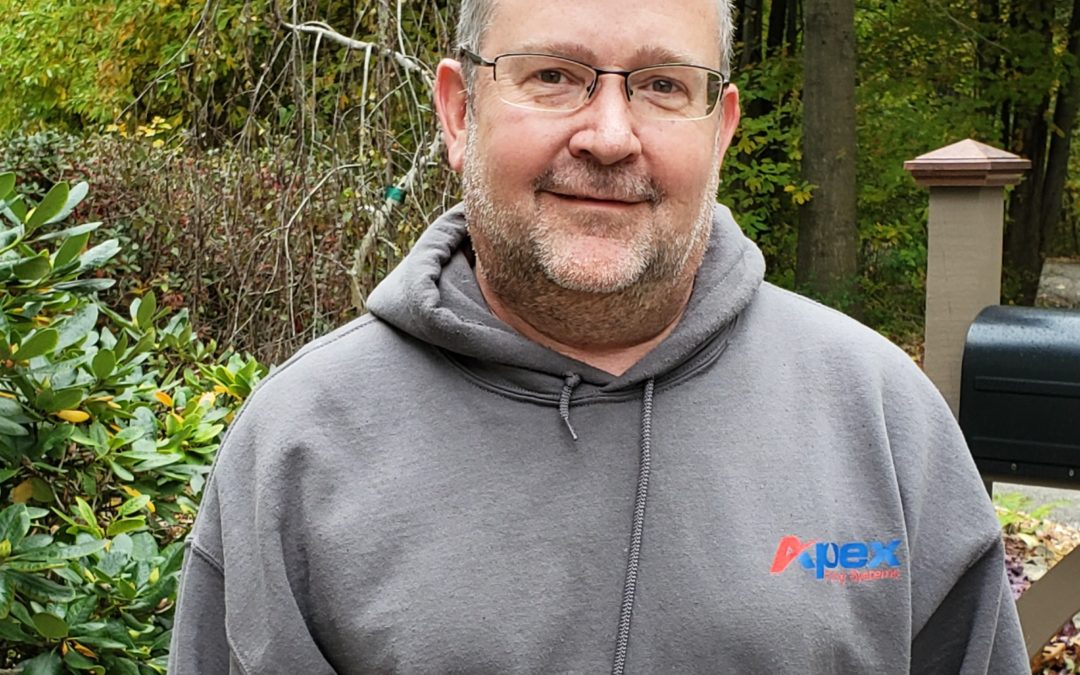 Meet, Brian Thorp. He is in the shop as one of our Technicians/Fabricators.  Brian came to us from a long-standing career. When I asked Brian how he decided to walk away from said career and join Apex Filling Systems, his immediate response was, ‘exactly what the company stands for!’ He knew without doubt that he belonged to such an organization with a vision and a goal bigger than the now.

Brian has been happily married since 1996 with 2 beautiful children, a son who is 18 and a daughter, 17.  He is not really into books, but can be caught reading a motivational book from time to time. I asked him if he had a good joke for me and he said he’s no good at telling them!  Brian thoroughly enjoys watching documentaries. Any kind, as they are so interesting. He has a desire to learn, for life.

I asked Brian what he was passionate about and the answer was so easily given… ‘my kids!’  Any and all things involving his children have been utmost fulfilling.  When asked who he would bring back for a day, if given the chance, (another easy answer,) his Dad and his Grandparents! Talk about a family man. We know how fortunate we are at Apex, to have such a guy seek out our visionary and team, to be a committed player!  What do you think he said when I asked who he would switch places with for 1 day? Naturally, with that strong urge to learn, he is going somewhere to learn culture so that he appreciates what we have here.

Brain and his family have a farm that has been in the Thorp family for over 100 years, with the 4 of them residing on and taking care of it since 1999.  Lots of responsibility and discipline comes with such a thing.  I asked him to share one of his family’s favorite traditions:  It is always getting the Christmas Tree. Something he and his wife have done forever, and now, he says that the kids actually have taken over and do the bee-lining for the perfect tree, leaving no tree un-looked.

The coolest thing Brian is currently working on is what he is doing/building here at Apex. He really believes in our product, purpose and people! How can you not want to be around such a guy!? I asked him the craziest thing he’s ever done and that was a debate… I guess he has done lots of crazy things. He decided on the backpacking in the Grand Tetons for a week in Wyoming.  What an amazing adventure for the adventurer!

Alright guys, I asked him his secret (no longer secret) power, and he divulged…. He is super patient and positive! Safe to say he exudes that persona consistently. Brian is a genuine guy and personally speaking, he brightens my days with his positivity and love for life.