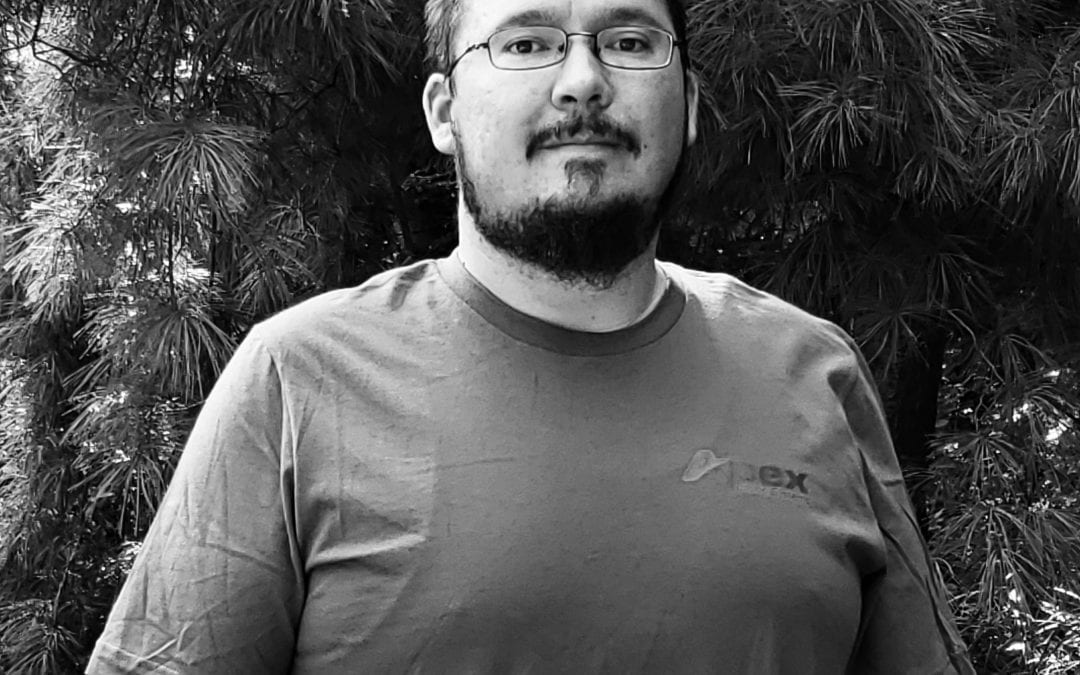 Meet Jon Ahlborn. Jon is the Director of Production here at Apex Filling Systems. Prior to joining the Apex family, Jon had a 15-year career in Information Technology and Manufacturing. He found himself more and more intrigued with the ‘how’. “How do products actually get made…how do manufacturing projects actually begin?” Jon is happily married to his wife Sarah and they share two children together. Rita, their 6 year old daughter, and Leo, their 4 year old son.

Jon is an avid reader, but never of books. Rather, he grew up wanting to read encyclopedias! Times dramatically changed when the world met the internet. Today, Jon is a bona fide Wiki surfer. Meaning, he goes to Wikipedia.com, searches his desired topic and then travels down the never-ending click trail that will lead you to a plethora of info on any and every thing you could have ever fathomed. True or otherwise! When I asked Jon if he was a good joke teller, he sheepishly replied, “yes, but I can’t tell you any.” I guess Jon only knows those good ol’ shop jokes! When I asked him what he was passionate about, he gave that great reply of “spending time with family and friends.”

When I asked him what the craziest thing he had ever done was, he gave a sinister chuckle, which then led him to a way-back-when story of when he was about 10 years old. They just got all new carpet in their family home. His parents left the kids home for a few hours, and Jon somehow accidentally set the new carpet on fire! It wasn’t a teensy spot. So, he was on the ground for the next 4 hours with an exacto knife and tweezers picking and pulling the unburnt fibers through. Would you believe he got away with it?! He relived the story behind laughter, that until more recently, his parents went all these years never knowing. They had disbelief when he told them, until he showed them the discrepancy.

Jon enjoys a good movie, comedies being the favorite. However, his favorite movies, The Hunt for Red October and Patton neither one fit into that category. The coolest thing Jon is currently working on would be his project car. It isn’t something he devotes lots of time to, more so, in phases. But, when he does focus working on it, it definitely takes the coolest task lead.

If it were possible to switch places for a day, Jon wishes to be Marc Cannon, so he can know what it feels like to be the owner of a multi-million dollar liquid-filling company on the sunny shores of Lake Michigan! If he were able to bring anyone back, he chooses his Grandpa A. He had infinite wisdom that Jon admires, but he still has his Grandma, and he knows she would love having her husband home!

The best meal he’s ever eaten came from his teensy Grandmothers kitchen, a rib roast that was as equally heavy as she was! He doesn’t have many pet peeves other than running out of cold beer. He prefers super heroes that are self-made vs those that really have dumb powers, cue Batman/Tony Stark vs Aquaman and Green Lantern. If he were a crayon, he would be black, so he can double as a pencil! He wants all of his co-workers to know exactly how much he appreciates their efforts in completing quality projects. His favorite family tradition circles around the adults and the coming together to drink and be merry, or hash life out. Either way, Jon loves being with the family and the riots they always incur together. We sure enjoy having Jon as an addition to the Apex Filling Systems team!